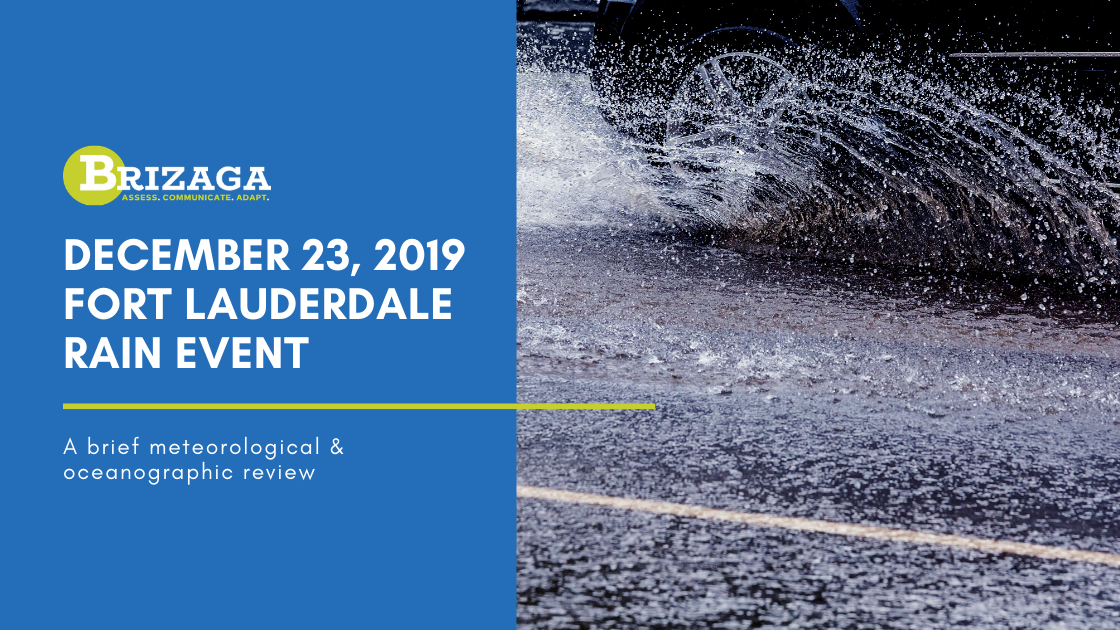 This is a brief meteorological and oceanographic retrospective of the significant rain event in Fort Lauderdale, Florida in the early morning hours of December 23, 2019. Many of these numbers are preliminary and may change when finalized by the National Weather Service.

In the early morning hours of December 23, 2019, Fort Lauderdale-Hollywood International Airport (FLL) closed due to severe rain and flash flooding.[1] An alert was posted at 3:40AM. Portions of the airport were completely inaccessible due to flooding. On one of the busiest travel days of the year, over 400 flights were delayed[2] during what is normally the dry season for South Florida. Around 5:30AM, the airport reopened, but traffic was backed up all the way to the airport entrance at Federal Highway. 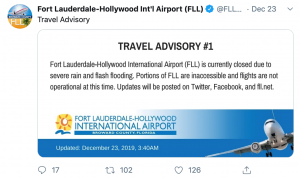 Several hours after the event, large portions of the airport and surrounding areas were still flooded. By sunrise, retention areas around Fort Lauderdale were still filled with water and several parking lots remained flooded, especially around the 17th Street corridor.[3] The horse stables at Gulf Stream park were flooded and the Hallandale Beach area was reported to have seen over 12 inches of rain. All of the horses were reported as safe.[4] Staff were reported to have used kayaks to reach and check on the horses. Urban flooding was reported in Hollywood, Dania Beach, and Fort Lauderdale.

A slow-moving area of low pressure was responsible for the large rainfall amounts seen across the Southeastern United States. The National Weather Service Weather Prediction Center provides graphical forecast maps, calling the National Forecast Chart, shown the on next page.[5] The Short Range Forecast Discussion from 2:59PM EST on Monday, December 23, 2019 explained that “[a] strong low pressure system near the Southeast U.S. coast continue[d] to produce heavy rain across the Carolinas Monday afternoon, with the heaviest rain near the South Carolina Coast. Additional rainfall of 1 to 2 inches is likely before the storm moves farther offshore on Tuesday. Given the rain that has already fallen across this region earlier today and on Sunday, flooding will continue to be a problem for poor drainage areas through Monday night.” A stalled coastal front extended across South Florida. 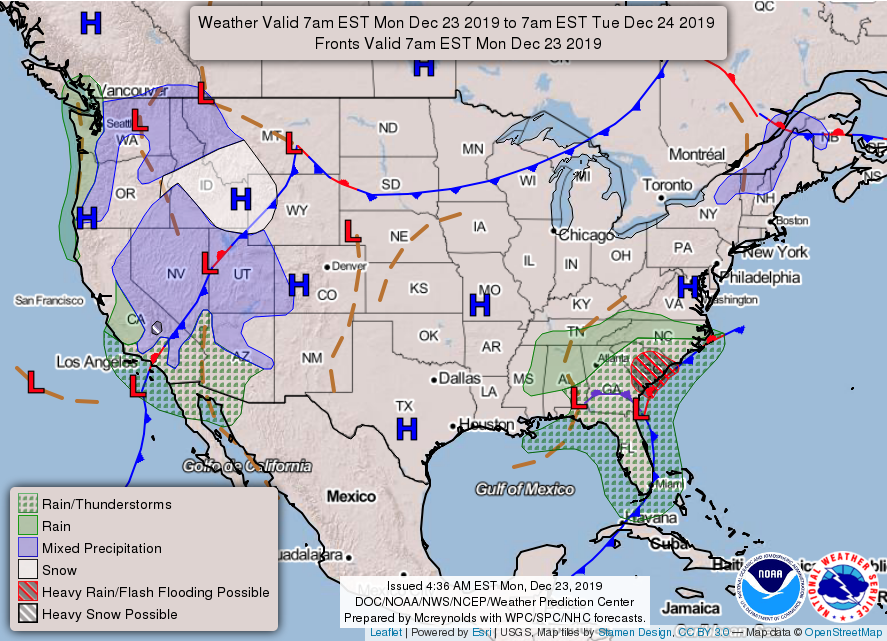 According to the Daily Climate Report and Recent Event Report,[6] 7.13 inches of rain was recorded at FLL on December 23, 2019, shattering the previous record for the daily maximum rainfall at the airport in December of 1.57 inches set in 1940. The normal monthly rainfall total for FLL for December is 2.46 inches.[7] In just three hours, from 12:53 to 3:53AM, 5.99 inches of rain fell at FLL, which is nearly 2.5 times the normal monthly total. While not as impressive as the FLL total, MIA also experienced a record-breaking daily precipitation total of 2.60 inches. The previous record of 1.40 inches was set in 1953. Radar estimated rainfall totals for the day topped 12.75” of rain in Halladale Beach.[8] The normal seasonal total (December – February) for the Fort Lauderdale area is 9.05 inches, which was exceeded in one day in parts of Broward County.

The GOES-16 infrared view (channel 14 infrared, 11 micron) from 12:37AM (5:37 UTC) on December 23, 2019 shows a cluster of high cloud tops, which can be associated with heavy rainfall, over South Florida during the rainfall event. The image is from the National Oceanic and Atmospheric Administration. It is this intense convection associated with an individual cell or event of the stalled front that was responsible for the rainfall. 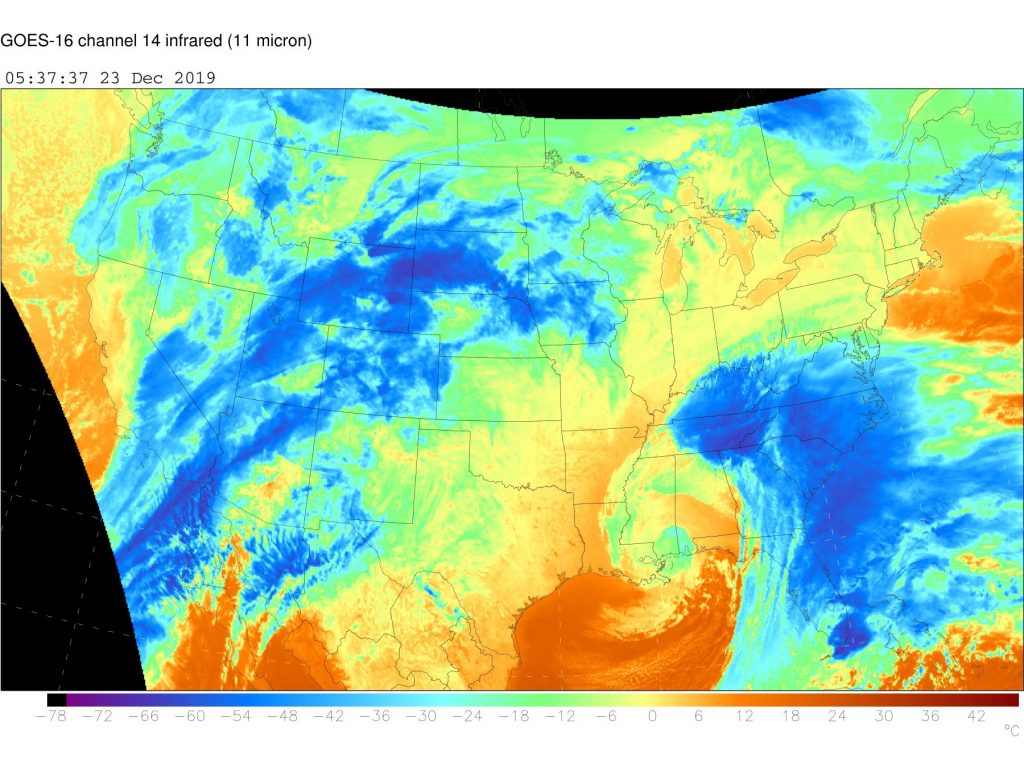 In just 3 hours between 12:53 – 3:53AM, 5.99 inches of rain fell. In the overnight hours of December 22 – 23, three separate top 10 one-hour total records were established for the month of December and two for the winter season. In the hour between 12:53 – 1:53AM, 4.45 inches of rain fell, setting the top record for the month of December and the winter season, and the second highest one-hour total for the station on record, including wet season totals. The previous top winter season and December record was from December 9, 2002 and was also the 7th highest total on record (now the 8th). That rain event was associated with a strong early winter storm that brought significant snow to the northeast, including 6 inches in Central Park.[10]

In addition to looking at the event as one of the most extreme ever recorded at this location, it is helpful to examine how often such a rainfall event should be expected in the area. The table below examines the rain totals recorded in the time spans of one-, three-, and 24-hours, and identifies the corresponding return period for those durations. While the one-day total is approximately a 5-year return period event (a 1-in-5 chance of occurring each year), the one-hour and three-hour rainfall totals are within the error bars of both a 25-year and 50-year storm. The annual probability of such a rain event occurring is between 2 and 4% based on NOAA Atlas 14 data.

The return periods are calculated using both dry season and wet season data. The rainfall amounts associated with the December 23, 2019 event were record-breaking in many respects, especially when considering that it occurred during the dry season.

The storm also coincides with a high tide, which was approximately 1 foot above Mean Higher High Water (MHHW). The orange arrow on the graph below[12] denotes the high tide event associated with significant rainfall event. Since the stormwater system in South Florida is primarily gravity-based, the tide condition likely exacerbated the flooding by slowing the flow of water  to the canals and ocean. With the ebb of the tide, stormwater was more easily able to drain. National Weather Service meteorologist Robert Garcia was quoted saying that Fort Lauderdale-area flooding was “exacerbated by a 6 a.m. high tide Monday that prevented streets from draining.”[13] For reference, the highest tides of the year are generally just above 2 feet above MHHW. 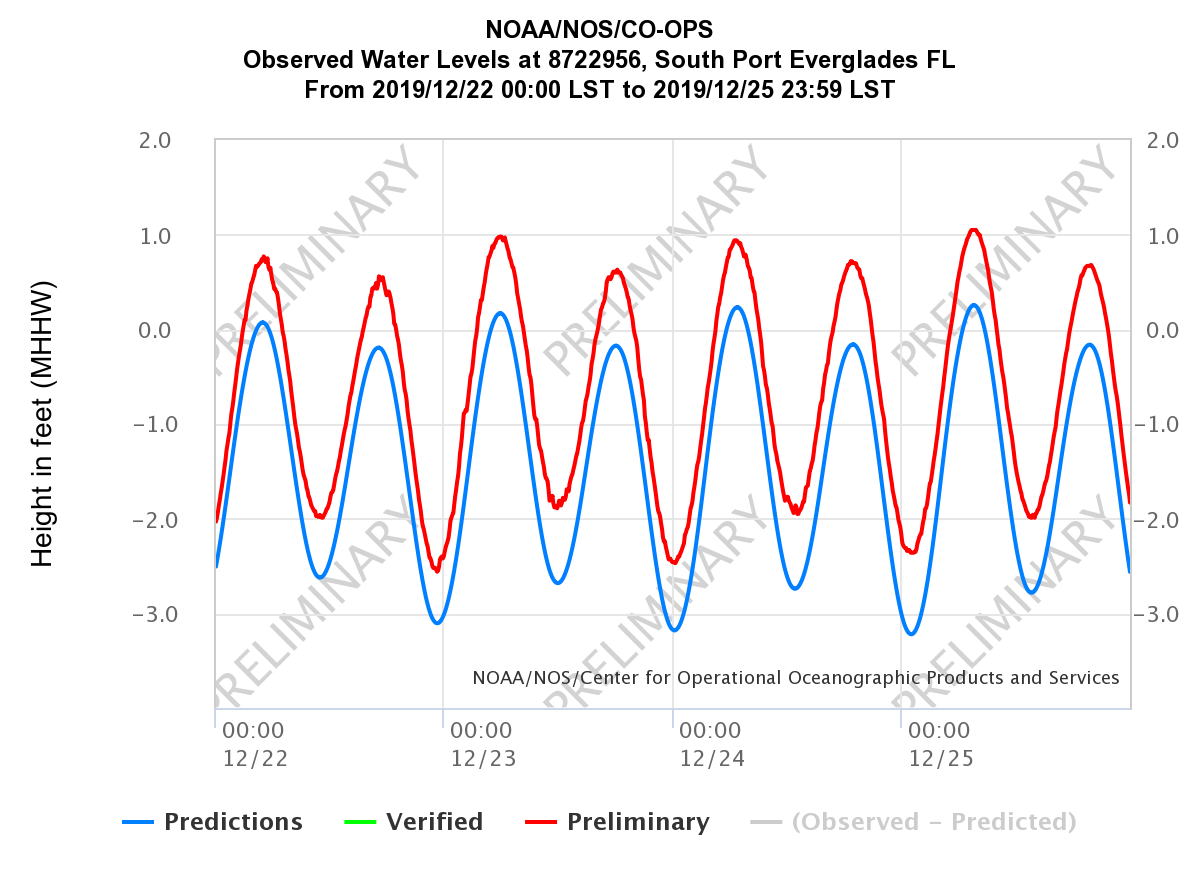 The record-breaking rainfall event on December 23, 2019 was a remarkable dry season event. Salient conclusions of the event include that it was: