Hurricane Harvey nearly has the nation’s complete attention. Beyond the immense human suffering caused by the flooding, wind, and surge, the storm’s massive impact sparked a flurry of discussion about a changing climate and the National Flood Insurance Program (NFIP).

No one can and should claim with certainty that a changing climate caused Hurricane Harvey. From what we have seen, scientists are generally not making that connection. The link between Harvey and climate change is nuanced and missed in soundbites.

What we do know.

We may see more storms like Harvey as long-term weather patterns change. To say that one particular storm would not have happened under a different climate scenario is still a tenuous conclusion. Our best global climate models forecast that conditions will be favorable for more storms like Harvey in the future. And by “more storms like Harvey,” we mean hurricanes in general. We expect to see more conditions that make the development of more intense storms possible. We are talking about a threat multiplier – something that will make current storms worse.

Sea level rise also played a part in increasing the storm surge associated with Harvey. Sea levels are higher in coastal Texas than they were a few decades ago. Higher seas will make the storm surge deeper, faster, and allow it to reach further inland.

What does that mean for flood insurance?

Congress returns from its August Recess in just a few days. Hurricane Harvey will no doubt be a topic of conversation on the Hill. The National Flood Insurance Program (NFIP) must be reauthorized before it is set to expire on September 30, 2017.

The current NFIP reform proposals seek to change the regulatory environment and provide for a more robust private flood insurance market. They aim to reduce the debt of the program and increase flood mitigation efforts. However, what remains unclear is how Congress will amend the program. Will it simply reauthorize the program and postpone dealing with policy changes? Or will it attempt to implement policy changes as part of the reauthorization process?

The program is already almost $24 billion in debt to the taxpayers and is nearing its borrowing cap (the amount of debt Congress has authorized the program to have). Claims from Harvey may push the program closer to that debt limit and provide greater urgency to explore policy changes.

When the skies clear and and we’ve pulled up our bootstraps, we must begin a conversation about how different the world may look when we rebuild, and rebuilt we must. 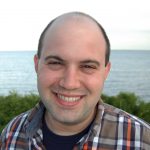 About the Author – Alec Bogdanoff, Ph.D.

Alec Bogdanoff, Ph.D., is a policy-trained oceanographer and meteorologist. Alec served as a Sea Grant Fellow for a U.S. Senator, and his areas of expertise include federal, state, and local policy making, and public outreach and advocacy. He has nearly two decades of political experience, and extensive strong background in science communication.

He holds a Ph.D. in physical oceanography from the Massachusetts Institute of Technology (MIT)/ Woods Hole Oceanographic Institution (WHOI) Joint Program in Oceanography, and a M.S. and B.S. in meteorology from Florida State University. Alec is the president and co-founder of Brizaga.