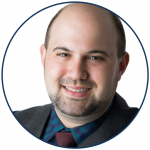 Alec Bogdanoff, Ph.D. is a policy-trained oceanographer and meteorologist. Alec is Principal Scientist and Co-Founder of Brizaga, leading communications, outreach, and science for the company. He founded Brizaga to focus on assisting businesses and communities in becoming more resilient to the effects of sea level rise and long-term environmental changes. He has nearly two decades of political experience, including managing campaigns, and extensive experience in science communication. Alec has addressed the Climate Solutions Caucus and Florida legislature on the financial implications of sea level rise.

He holds a Ph.D. in physical oceanography from the Massachusetts Institute of Technology (MIT) and Woods Hole Oceanographic Institution (WHOI) Joint Program in Oceanography, and a M.S. and B.S. in Meteorology from Florida State University. Alec’s research specializes in large-dataset creation and manipulation, satellite remote sensing, air-sea interaction, turbulence, and ocean modeling.

Alec served as a John A. Knauss Sea Grant Fellow for a United States Senator on Capitol Hill focusing on ocean, environmental, climate, and fisheries policy. He also previously worked for a startup company focused on flood risk, managing much of the day-to-day science and operations for the company.

While at MIT, he led the Science Policy Initiative, which assisted scientists and engineers in learning how to effectively communicate science to policy-makers and the general public. Additionally, at WHOI, he was involved in the Broader Impacts Group that served to facilitate integrating the science and scientists in Woods Hole with the local community. At Florida State, Alec served as the Science Outreach Coordinator for the North Florida Chapter of the American Meteorological Society. With a motivated group of officers, the chapter spearheaded making Florida State the first National Weather Service certified StormReady university in the state of Florida.

As a South Florida native, Alec is keenly aware of the challenges that a changing environment and sea level rise pose for coastal communities. With strong policy and political experience on the local, state, and national level, he is ready to help business and communities create a more resilient tomorrow.